Insects in the News: Puss Caterpillar

On 11 September 2020, the Virginia Mercury published an article about a woman in New Kent, Virginia who discovered first-hand how deadly an encounter with a cute, little puss caterpillar can be. The woman, Crystal Spindel Gaston, was reaching into her car when she felt a pain on her calf that was “exactly like a scorching-hot knife passing through the outside of my calf.” 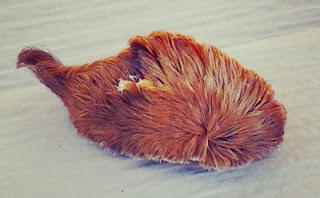 The puss caterpillar is the larval stage of a moth that goes by the scientific name Megalopyge opercularis. The caterpillar is a small creature; when fully grown, it ranges from 1 to 1½ inches in length. It has an ovoid sort of shape with a tail at one end and no apparent face at the other end. A dense coat of hair, ranging from a light sandy to a dark brown color, covers its body. Overall, they are very cute—often said to look like a cat (hence, “puss caterpillar”), or a hairy little dog, or like the tribbles as seen on Star Trek’s memorable episode “The Trouble with Tribbles”. 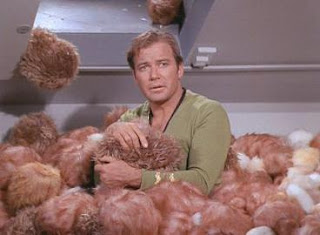 Caption Kirk in a pile of tribbles.
(Image from Wikipedia.)

Captain Kirk was frustrated when he found himself in a pile of tribbles, but if those had been puss caterpillars, he’d have been writhing in pain and wishing for death. That’s because the puss caterpillar possesses urticating hairs—each hair is a venomous quill that, upon contact with a person, breaks off, punctures the skin, and injects the deadly venom, causing immediate and incredible pain. It gets worse. The pain drills down into the bones and radiates from the point of injection encompassing a much greater portion of the body than the site of contact. A drastic drop in blood pressure and a rapidly beating heart are common. Weakness and fatigue ensue; some people pass out. Victims may suffer intense headaches, fever, and acute abdominal pain. The initial contact is bad, but as time progresses, the pain gets worse, building and intensifying for 2 to 3 days. There are no recorded deaths from puss caterpillar venom, but there have been close calls and many trips to Emergency Rooms.

Twice in Texas, schools had to be closed because of puss caterpillar outbreaks, once in 1923 in San Antonia, and once in 1951 in Galveston. The puss caterpillar is abundant in Texas at any given time, but in those two years and locations, they were super-abundant. Outbreaks are common among insect populations. The puss caterpillar isn’t well known in Virginia—except maybe by the extension agencies and the entomologists—because the caterpillars usually occur in low numbers there. But this year, for whatever reason, or reasons, conditions have been ripe for the rapid buildup of puss caterpillar populations and they are all over the place. Since Crystal Gaston’s incident, many others in Virginia have had unfortunate experiences with the humble puss caterpillar, and it is getting noticed now! Suddenly it is all over the headlines, from the Washington Post to the New York times, and it has become fashionable among these journalists to warn people to practice social distancing with this insect!

However, very often contact is made without being aware of the caterpillar. They are inconspicuous, quiet, unassuming little creatures. Crystal Gaston leaned her leg against her car frame and—zap!!—there it was. You may unwittingly come in contact with a puss caterpillar doing something as innocuous as placing your hand on a fence, or sitting down at a picnic table, or leaning against a post. The puss caterpillars eat tree leaves from a wide range of trees. In Florida, they are often found on oak and elm trees, and sometimes they fall out of their trees and onto an unsuspecting person standing, or sitting, or enjoying a nap, or just passing by, under the tree. Once, sitting at my kitchen table, I looked down and saw a puss caterpillar slowly creeping up my shirt. I had just been in our yard and it had probably fallen from one of our many oak trees. Being an entomologist, I recognized the little animal and carefully removed my shirt without making contact. So, as in many situations found in this increasingly insane world, be aware of your body in time and space and of the life and objects around you.

And be impressed by the power this tiny, cute little insect possesses.

Insects in the News: Puss Caterpillar

On 11 September 2020, the Virginia Mercury published an article   about a woman in New Kent, Virginia who discovered first-hand how deadly a...